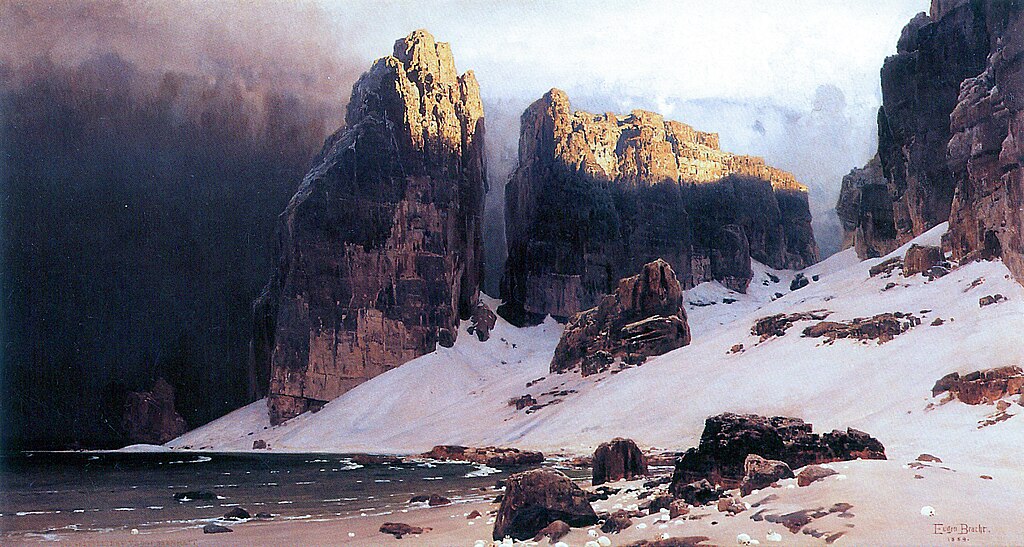 Although the two never met,Wagnerwas profoundly influenced by the German philosopher Schopenhauer. Kevin Painting chronicles Wagner's avid reading of Schopenhauer and how it came to influence many of his works, especiallyTristan und Isolde, Die Meistersinger von Nürnberg, and Parsifal.

Richard Wagner first came across the works of the philosopher Arthur Schopenhauer when he was lying low in Switzerland following his participation in the 1848 Dresden uprising where he had manned the barricades and was even rumoured to have had set fire to the opera house where he wasKapellmeister. Like his revolutionary friends, the conductor August Röckel and the anarchist Mikhail Bakunin, this respite gave ample time to take stock – he in Zurich, his friends mouldering in prison awaiting execution (later commuted to prison terms).

His own revolutionary zeal is downplayed in his autobiographyMein Leben, where he writes of Bakunin “I, with my hopes of a future artistic remodelling of human society, appeared to him to be floating in the barren air; yet it soon became obvious to me that his assumptions as to the unavoidable demolition of all the institutions of culture were at least equally visionary.”

Nevertheless, exiled in Zurich, he continued to develop his own revolutionary and groundbreaking ideas (in the arts at least) in two volumes of writings,The Artwork of the FutureandOpera and Drama. Wagner was many things: composer, conductor, intellectual, and polemicist. He read avidly, immersing himself in the intellectual climate of the day which was dominated by the German Idealist philosophers.

“I had always had an inclination to fathom the depths of philosophy,” he writes inMein Leben, “just as I had been led by the mystic influence of Beethoven’s Ninth Symphony to search the deepest recesses of music.” But it was his discovery of Schopenhauer which had the most lasting influence on his life and music, most conspicuously in the operasTristan und Isolde,Die Meistersinger von Nürnberg, andParsifal.

He acknowledged this in a letter to his lover, Mathilde Wesendonck. “[A] unique sense of self-renewal overcomes me each time I open that book of his,” Wagner writes “for here I find myself a whole person once more and see myself fully understood and clearly expressed, but in a quite different language, which soon transforms my suffering into an object of understanding, … at the same time [it] reveals the whole world to me! …. And how good it is that the old man knows nothing at all of what he is to me, nor what I am through him.”

Schopenhauer had a considerable influence on the symbolist painters

In his seminal work, theCritique of Pure Reason(published in 1781), Kant’s stated aim is to banish dogmatic speculation from the realm of metaphysics (that area of philosophy which deals with the ultimate nature of reality), by investigating the limits of human knowledge.

The idea that how we experience the world is dependent on the equipment we use is in itself an uncontroversial one, as any audiophile knows when listening to music. But Kant goes much further. He states that quite independently of any sensory apparatus, the mind produces the order we see in the world; it makes the world comprehensible in the first place. This includes the concepts of time, space, and of cause and effect. A consequence of this view is that things as they appear to us in the world (the “phenomenal world”) are not the same as things really are “in themselves” (the “noumenal world”). Put simply, we can never behold the intrinsic nature of reality.

As with all ideas with far-reaching implications there has been much debate about what Kant really meant (a modern day example: what does ‘Brexit’ mean?). The debate has not been helped by Kant’s notoriously difficult style, indeed it is sometimes said that Germans will learn English just to read Kant in translation. But one group of philosophers thought they understood him – the German Idealists. This group included Fichte, Schelling, Hegel and, of course, Schopenhauer. Johannes Gottlieb Fichte rejected Kant’s idea of noumenal reality, not by simply by discarding it but by doubting that there was anything out there at all: the natural world is a creation of an immaterial consciousness (the self) which is outside of space and time. Friedrich Wilhelm Joseph von Schelling in more mystical terms described the world (Nature) as materialised Spirit, constantly evolving and striving for self-awareness which is reached in its highest forms in Man, especially in the creative arts. For Georg Wilhelm Friedrich Hegel, the ultimate reality was a universal self or spirit, something he called “Geist”, constantly developing towards self-knowledge according to a specific ‘dialectical’ pattern.

Schopenhauer would have none of this and attacked them for what he saw as their pretentious windbaggery. He accepted Kant’s distinction between the world as we perceive it and the hidden, noumenal world as it really is, but he disagreed that we can know absolutely nothing about this noumenal world since we ourselves are part of it. We move our bodies, we are conscious that wewillour bodies to move. He argues that this will (or ‘will to live’) is itself noumenal and fundamental to everything.  The will is limitless energy: blind, impersonal and purposeless, surging but directionless. In Schopenhauer’s bleak view, it condemns all creatures to lives of unfulfilled striving and abject suffering which ceases only upon death and the annihilation of the self.

He expanded on his ideas in his masterpieceThe World as Will and Representation, a cogently written and lucid work which eventually became as talked about and influential in its day as Richard Dawkins’The Selfish Genehas in ours, finding its way on to conversation tables around Europe and, in a well-thumbed copy, onto Wagner’s bedside table.

Wagner’s discovery of Schopenhauer’s philosophy in 1854 was a life-changing event. Its message – that suffering was caused by insatiable craving and longing, overweening egotism and the cruelty of others – chimed with Wagner, whose disorderly life was rent with penury, failure, frustrated ambition and an unhappy marriage.

For Schopenhauer, art and aesthetic contemplation afford a respite from “the impetuous and dark impulse of willing” in which we can “lose ourselves in contemplation of the infinite greatness of the universe … [and] forget individuality”. Music occupies pride of place in this scheme. “Its effect on man’s innermost nature is so powerful,” he writes, “and it is so completely and profoundly understood by him in his innermost being as an entirely universal language whose distinctness surpasses even that of the world of perception itself.” The composer is a genius who “reveals the innermost nature of the world, and expresses the wisdom in the profoundest language that his reasoning does not understand.”

Never before had Wagner found so many of his beliefs and inchoate ideas for his operas so clearly expressed. “The effect thus gradually wrought upon me was extraordinary,” he wrote, “and certainly exerted a decisive influence on the whole course of my life.”

The effect on Wagner’s music and writings was immediate and direct. But Wagner, ever the stubborn genius, showed his independence, once writing in a letter “I have been slowly rereading Schopenhauer’s principal work, and this time it has inspired me … to expand and – in certain details – even to correct his system.” He avoided shoehorning his work into the Schopenhauerian cast where it did not fit his own vision, or as one writer put it “Wagner was Schopenhauerian except when he wasn’t”.

A good example is in his ravishing, sensuous masterpiece,Tristan und Isolde, its famous ‘Tristan chord’ only resolved at the end of the final act with the death of the ill-fated lovers (a very Schopenhauerian touch). In the scene where the couple drink the love-potion, Wagner writes in the programme notes “Henceforth no end to the yearning, longing, bliss and misery of love: world, power, fame, splendour, honour, knighthood, loyalty and friendship, all scattered like a baseless dream; one thing alone left living: desire, desire, unquenchable, longing forever rebearing itself, -- a feverish craving: one sole redemption – death, surcease of being, the sleep that knows no waking!” But for Wagner the couple are redeemed by death and remain united in death,  not dissolved into nothingness as Schopenhauer would have fashioned it.

Another example is in the final scene ofGötterdämmerung, the fourth opera in his great tetralogyDer Ring des Nibelungen.Wagner struggled when writing the text for the powerful scene of Brünnhilde’s immolation and had several changes of mind. Eventually he settled on his fourth version (Final Published Ending, 1852) but not before having a re-think after discovering the work of Schopenhauer. The fifth version, the so-calledSchopenhauer Ending(1856), dispenses with the central idea elsewhere in the Ring of love as a redemptive force, instead it becomes a source of suffering to be extinguished. After much rumination, Wagner wisely dropped it.

Feel how the flames burn in my breast, effulgent fires seize holdof my heart:

to clasp him to mewhile held in my arms and in mightiest love to be wedded to him! - Heiayoho! Grane! Greet your master! Siegfried! Siegfried! See! In your bliss, your wife bids you welcome!

– Final Published Ending, 1852(excerpt)I close behind me now: to the holiest chosen land, free from desire and delusion, the goal of the world’s migration, redeemed from reincarnation, the enlightened woman now goes. The blessed end of all things eternal, do you know how I attained it? Grieving love’s profoundest suffering opened my eyes for me: I saw the world end.

Wagner never met Schopenhauer even when he had the opportunity owing to an uncharacteristic bashfulness on his part. He did however send him a copy of hisNibelungenpoem. “I learned later … that he spoke impressively and favourably of my poetry”, he notes inMein Leben.

But Schopenhauer was no great fan of Wagner’s music. At the end of the first act ofDie Walkürewhere the stage direction says “The curtain falls quickly”, Schopenhauer scribbled in the margin of his copy “And about time too!”