In his recently published memoirs,Words Without Music (2015), the American minimalist composer Philip Glass tells the story of a lesson in musical counterpoint he had one afternoon with the formidable Nadia Boulanger. After proffering his 20 page manuscript, Mademoiselle (as she was known) placed it on the piano’s music rack and cast her eyes over the densely written pages. At a certain point she paused, drew breath and enquired after his health.

“Not sick, no headache, no problems at home?”

“No Mlle. Boulanger, I am really fine”.

“Would you like to see a physician or a psychiatrist? It can be arranged very confidentially”.

She wheeled her chair around and screamed “Then how do you explainthis?”.

She had found “hidden fifths” between an alto and bass part – a heinous crime, if ever there were one. After upbraiding him for his slackness and lack of commitment he was dismissed and the lesson was over.

Nadia Boulanger had a reputation as a stern teacher, relentless taskmaster and stickler for detail (although unlike the music professor in the Oscar-winning filmWhiplash, she never resorted to physical violence). The list of students who passed throughLa Boulangerie(as her classes were known) reads like a roll-call of 20thcentury music: from the composers Aaron Copland, Elliot Carter, Virgil Thompson, Philip Glass,Walter Piston, Roy Harris, Quincy Jones, Darius Milhaud, Jean Françaix, Michel Legrand and Lennox Berkeley to the musicians Yehudi Menuhin, Kathleen Ferrier, Dinu Lipatti, Daniel Barenboim, John Eliot Gardiner and Idil Biret (to name but a few). She and her life-long musical assistant Annette Dieudonné never kept detailed records of the students she taught but so great was the number that Virgil Thompson once quipped that “every town in America has a drugstore and a student of Boulanger”.

Nadia Boulanger (1887 – 1979) was born into a distinguished musical family. Her father Ernest Boulanger (1815 - 1900) was a professor at the Paris Conservatory and her glamorous mother, the young teacher Raissa Mychetsky, was formerly a Russian princess. Her father instilled in the young Nadia the sense that music was  “…a more urgently natural part of life than literature … or sex” while her mother taught her the need for constant self-improvement.

Showing early promise, Boulanger trained at the Paris Conservatory from 1897 to 1904 and studied composition with Gabriel Fauré and organ with Charles-Marie Widor, winning several prizes. She became active as a soloist/accompanist, composer, and she taught both at the Conservatory and privately at the family apartment at 36 rue Ballu (where she continued to live and teach for the rest of her life). One of her earliest students was her younger, gifted sister Lili who in 1913 became the first woman ever to win the First Grand Prix de Rome. It was Lili’s untimely death in 1918 that led the heartbroken Boulanger to abandon composition altogether and to concentrate on teaching and occasional performing. Fauré thought this a mistake, but Boulanger was adamant and told him “If there is one thing of which I am certain, it is that my music is worthless”. Later she added that she thought her music was “… [neither] good enough to be beautiful, nor bad enough to be amusing”.

She quickly established herself as an indefatigable and sought-after music teacher of great erudition and discernment. From the 1920s onwards, she started wearing elegant and full-length handmade dresses (which became her trademark) with her hair tied back in a bun, giving her the appearance of an austere maiden aunt. Of her many teaching positions, she became the star attraction at the American Conservatory of Music in Fontainebleau where she taught from 1921 for the rest of her life, apart from the war years when she took up teaching positions in America. She held court at her spacious apartment on rue Ballu, where she conducted her private lessons and held musical soirées where students could mingle with the leading composers and musicians of the day.

Concerning her choice of students she identified three categories “…those without money and without talent, those I do not take; those with talent and without money, those I take, and those with talent and money, those I do not get”. She even turned down George Gershwin as she felt that she had nothing to offer him. (Gershwin also approached Stravinsky for lessons but on revealing how much he earned, Stravinsky replied “Perhaps I should study with you, Mr. Gershwin”).

Among her many achievements, she became the first women to conduct several major orchestras (including the New York Philharmonic, the Boston Symphony, the Philadelphia; and in England, the BBC Symphony, the Royal Philharmonic and the Hallé). As well as taking an active interest in her students’ own compositions, she championed early French music and the works of Claudio Monteverdi, Heinrich Schütz and her mentor, Gabriel Fauré.

In a rare interview with the BBC in 1973, Nadia Boulanger says “Only undertake music … if you’d rather die than not to do music”. This perhaps explains why she demanded so much from her students: music was a calling and everything else was subservient to it.

Above all, she trained her students how to listen to music and to understand its inner workings – line by line, phrase by phrase, bar by bar – through a punishing regime of harmony, counterpoint and solfège. Only then she believed could a student start composing and develop their innate style. Philip Glass put it thus “if you had studied with her diligently you would end up with a toolbox of shiny bright tools that you knew how to use. And that was a tremendous thing … you could do anything that was needed”.

Boulanger’s tastes in music were wide and eclectic but straightforward, her main criterion being that music should engage both the intellect and the passions. For this reason she disliked the serial compositions peddled by Schoenberg and others for being too intellectual (and she was moreover frankly aghast at the experimental compositions of Edgard Varèse, asserting elsewhere that “…one must distinguish oneself through individuality and not singularity”).

The 20thcentury composers she most admired were Bartók, Ravel and above all, her idol Stravinsky with whom she developed a life-long friendship, collaborating with him in the revision of his Symphony of Psalms and taking on his son Soulima Stravinsky as a student. In 1931, Lennox Berkeley wrote “…[Boulanger] loves passionately all good music, whether it be light or heavy, simple or complicated. A good waltz has just as much value to her as a good fugue, and this is because she judges a work solely on its aesthetic content … Some people think that because you like Stravinsky you cannot also like Beethoven, or that an admiration of Johann Strauss is incompatible with a love of Bach. To Nadia Boulanger such an attitude would be incomprehensible”.

Igor Stravinsky and Nadia Boulanger on board a transatlantic steamer in 1937.

The stories about her demands are legendary. Her ‘voluntary’ (i.e. mandatory) Wednesday afternoon classes for all her current students struck terror into the hearts of all who attended. Philip Glass recalls one such occasion when she announced that the following week’s study piece would be the famous Mozart Piano Concerto no. 21 and that students should be prepared to play the third movement. “If someone said, ‘Mademoiselle Boulanger, I’m not a pianist’, she would say ‘It doesn’t matter, play it anyway’”. On another occasion she told one student that by the age of ten she could play from memory all 48 preludes and fugues from Bach’s The Well-Tempered Clavier.The student replied that it would be impossible for him. “Nonsense!”, she retorted, “do one a week, it will take you less than a year”.

In spite of her fearsome reputation, Boulanger was nevertheless generous to a fault. When Glass unsuccessfully tried to renew his Fulbright fellowship, she insisted that he stay in Paris anyway to continue his studies with her, and she waived all her fees. A year later (at what would be their last meeting) he announced that he would be returning to New York but she was adamant that he stay “…for a total of seven years and, if not seven, then five and if not five, then three”. Constantly mocked by his fellow students, Glass had no idea what she thought of his music other than she considered him “a real composer”. It was only years later that he saw what she had written to the US embassy over the renewal of his Fulbright fellowship “My impression is that he is a very unusual person and I believe that some day he will do something very important in the field of music”.

Her first student at Fontainebleau,Aaron Copland, was in no doubt about her influence. In one letter to her he wrote “It’s almost 30 years (hard to believe) since we met – and I still count our meeting the most important event of my musical life. What you did for me – at exactly the period I most needed it - is unforgettable. Whatever I have accomplished is intimately associated in my mind with those early years and with what you have since been as inspiration and example. All my gratitude and thanks go to you, dear Nadia”. 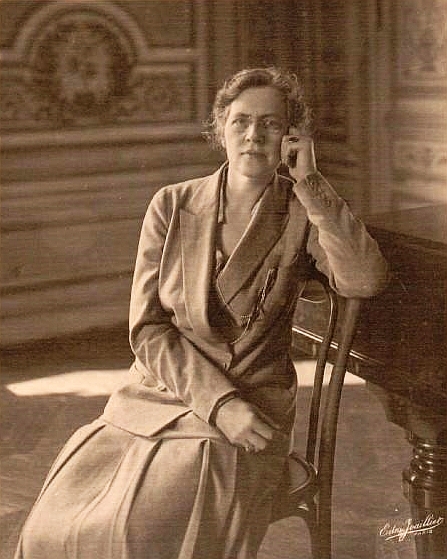 Tireless and indefatigable, fêted and revered, she continued teaching right to the end of her long life. Leonard Bernstein visited her shortly before her death in October 1979 when she was bedridden, crippled with arthritis and virtually blind. After a brief exchange he asked:

An Interview with Nimrod Borenstein