Brazilians hailing from outside Rio de Janeiro sometimes complain that the locals (cariocas) are like the giant statue of Christ the Redeemer on Corcovado: they greet you with open arms and they don’t hug you.

Darius Milhaud(1892 - 1974) thought otherwise. The twenty months he spent in Rio de Janeiro between 1917 and 1918 as an attaché to the French consular mission left an indelible impression on him and his music.

“After my return to France,” he recalled in 1942, “I thought often of the lively rhythmic maxixes and of the more nonchalant airs of the tangos. I considered making a sort of rhapsody based on the airs which I had heard there … I wanted a piece of uninterrupted movement, colourful and torrential. I was reminded of Charlie Chaplin’s films. Later I gave it the title of an old Brazilian air,Le Boeuf sur le Toit, and as a subtitle “Fantaisie for the movies.”

Milhaud’s fruitful stay in Rio de Janeiro was thanks to his close friendship with the Catholic poet and diplomat Paul Claudel, whose translation of Aeschylus’sOresteiatrilogy Milhaud had set to music:Agamemnon(1913),Les Choéphores (1915) andLes Euménides(1917 – 1922), works that were noted for their polytonality and rhythmic expression.  When Claudel was appointed consul in Rio de Janeiro in 1916, he invited Milhaud to accompany him as his secretary. Milhaud jumped at the chance; he was a seasoned traveller, imbibing influences wherever he went. Moreover, at the time he had been shaken by the death of his friend and collaborator Léo Latil in the trenches of the First World War.

Like so many visitors to Rio de Janeiro, Milhaud was captivated by the beauty of the city and the warmth of the people. “I would go to Copacabana beach, facing the Atlantic,” he wrote in his autobiography. “In the evenings I often walked around the Tijuca. I loved to see the panorama of Rio gradually spread out before me, with the bay clearly outlined in glittering lights; or else I would take a boat to the other side of the bay, near Niteroy, and lie on the lonely beach for a whole part of the night.”

And if this was not enough, he was fascinated and engrossed by the music. “I arrived in Brazil just in the middle of the carnival and immediately sensed the mood of crazy gaiety that seized the whole town,” he later recalled. “It is a time during which popular mirth bursts forth with a violence undreamed of by Europeans accustomed to the three days of festivity of a carnival in Nice or Aix.”

Describing the preparations forCarnaval, as intense then as now, he noted “it is at this period that the song of the year comes into the limelight; very soon it becomes hackneyed. One hears it sung in the street, whistled by workers going to work or by peddlers selling sherbets or green plants, carrying their merchandise on a table which they place on their heads. This song is ground out by the municipal band and creeps into the homes through victrolas and radios.”

On Brazilian popular music, he enthused “The rhythms … intrigued and fascinated me. There was an imperceptible suspension in the syncopation, a nonchalant respiration, a light pause that I found very difficult to grasp. So I bought a large quantity of maxixes and tangos; I made an effort to play them with their syncopated rhythms that pass from one hand to the other. My efforts were rewarded and I could finally express and analyze this typically Brazilian subtlety [in French,Ce petit rien si typiquement bresilien]. One of the best composers of this genre of music,Ernesto Nazareth, used to play the piano in front of the door of a cinema on Avenida Rio Branco. His fluid, elusive, and sad playing also helped me acquaint myself better with the Brazilian soul.” 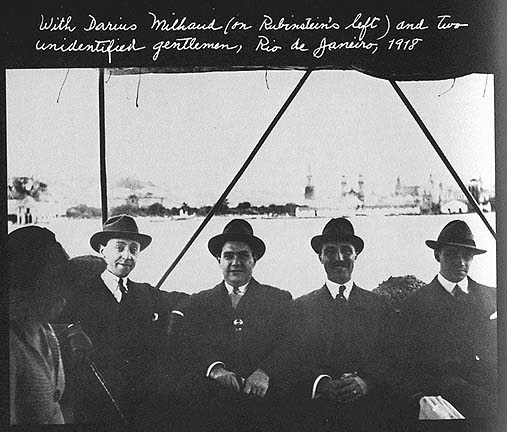 Milhaud was helped in his study of Brazilian popular music by publishing houses in Rio de Janeiro and São Paulo that catered to the growing public taste for a new and distinctive Brazilian style of music which incorporated syncopated rhythms into European musical genres. He declared “It would be desirable that Brazilian musicians realized the importance of the composers of tangos, maxixes, sambas, and cateretês, like Tupinamba and a genius such asNazareth... The rhythmic richness, the ever renewed fantasy, the verve, the drive, the prodigious melodic invention which one finds in each work of those two masters, make them the glory and jewel of Brazilian Art.”

The undoubted success of the 1918 carnival was the tangoO Boi no Telhado(The Ox on the Roof) by José Monteiro, published under the pseudonym Zé Boiadêro.  Milhaud would use the title for his love letter to Brazil, his enduringly popularLe Boeuf sur le Toit(1919) which is usually heard in its orchestral version.

This infectious carnavalesque romp is an intoxicating collage of 28 popular melodies by no fewer than 14 Brazilian composers, meshed together with Milhaud’s customary brilliance. He described its structure thus “I assembled a few popular melodies, tangos, maxixes, sambas and even a Portuguese fado, and transcribed them with a rondo-like theme recurring between each successive pair.” Milhaud omitted to acknowledge his sources (and bickering researchers were later kept busy in an attempt to identify them) but it does seem likely that Milhaud wrote the repeating rondo theme himself.

The work’s clever polytonal construction belies the apparent simplicity of its structure; for every section, each melody is introduced in a key a minor third above its predecessor such that by the end of the work, all twelve keys have been used. In quoting melodies, he sometimes uses different segments of the same melody (even in a different order) or plays fragments of melodies from different composers simultaneously and in different keys. A good example of this technique is in the early part of the work where two famous melodies byErnesto Nazarethare heard in counterpoint:Cariocaby the violins andEscorvadoby the woodwinds. The overall effect of this deft technique is mesmerising.

In his autobiography, Milhaud relates how Jean Cocteau had different ideas for this marvellous confection. Rather than serve as an accompaniment to a silent film, Cocteau proposed instead a ballet for which he would provide the scenario.

This turned out to be a predictably surreal affair. Set in a Prohibition-era ‘Nothing-Doing Bar’ in Manhattan, the characters include a transvestite, a negro dwarf, a bookmaker, a policeman and so on. With arresting set designs by Raoul Dufy and costumes by Falconnet and starring the famous Fratellini clowns François and Albert in drag with Paul as the barman, it was a scandalous success when it opened in February 1920 at theComédie des Champs-Elyséesin Paris.

Not long afterwards, a hugely popular bar opened with the same name which became the centre of Parisian cabaret society in the 1920’s; Milhaud was given a life membership but the bar’s fame soon outshone the dazzling piece which inspired it.

Milhaud omitted one amusing but embarrassing anecdote about the passage ofLe Boeuf sur le Toitto the stage which the celebrated pianist Arthur Rubinstein later related in his autobiographyMy Many Years(1980).

Rubinstein was present when Milhaud presentedLe Boeuf sur le Toitto the great Russian impresario Sergei Diaghilev with the hope of getting the work included in Diaghilev’s next season. “While tea was served,” relates Rubinstein, “Cocteau took me to another room. ‘Arthur,’ he said, ‘please don’t make any remarks after hearing the music. Milhaud composed the ballet which he callsBoeuf sur le Toitusing nothing but Brazilian tunes, most of which he composed by himself [sic], but there are also some popular ones from Brazil and he is deeply alarmed that you might reveal it in front of Diaghilev, as you are the only one who might recognize them.’ I promised, crossing my heart, not to say a word. We settled around the piano and Milhaud and Auric gave us a lively performance of this most engaging music.” 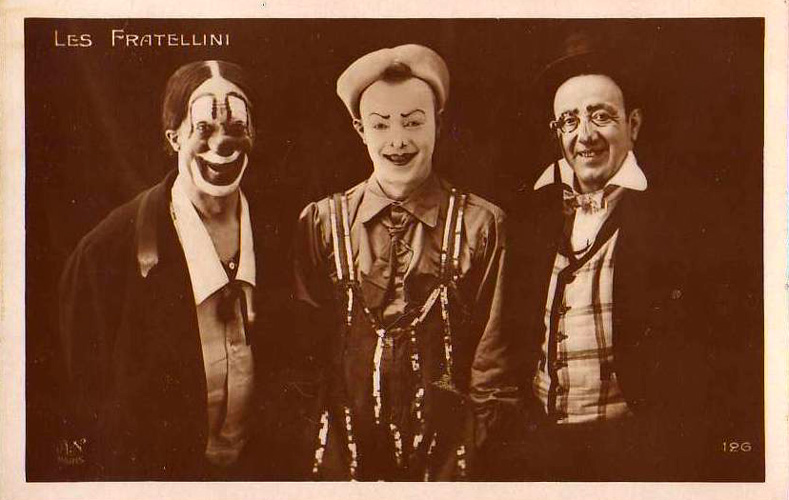 The Fratellini brothers, who starred in the premiere of Le Boeuf sur le Toit

Rubinstein continues “The first words came from Diaghilev: ‘Est-ce que tout cela est original? [Is all this original?]’ Milhaud, with the expression of a schoolboy caught copying his neighbour, answered weakly, ‘Practically everything…’”

The admission was fatal and Diaghilev, wary of paying hefty royalties, turned it down. Cocteau on the other hand had grand designs for the work and the rest, as they say, is history.

The critical reception forLe Boeuf sur le Toitin Brazil was mixed. While no-one recognised the borrowed melodies in Paris, everyone in Rio de Janeiro did. This made the lack of acknowledgments all the more perplexing; others found the scenario of the ballet in bad taste.

Later, Milhaud seemed to rue the lasting success the piece achieved. “Forgetting that I had writtenLes Choëphores,” he wrote, “both public and critics agreed that I was a figure of fun and a showground musician ... in composingLe Boeuf sur le toit, [I] had only aspired to create a merry, unpretentious divertissement in memory of the Brazilian rhythms that had captured my imagination but had certainly never made me laugh.”

Throughout his life Milhaud remained fascinated by Brazil and it inspired some of his most famous works includingL'Homme et son Desir(1918),Saudades do Brasil(1921),Carnaval d'Aix(1926),Scaramouche (1937),Danças de Jacaremirím(1945), andLe Globe Trotter(1957).

But it is withLe Boeuf sur le Toitthat Milhaud pays his greatest homage to the Brazilian composers of “tangos, maxixes, sambas and cateretês”. It is impossible not to be swept along by the carnival mayhem in this glorious work and it somehow seems fitting that the final melody to be played in the riotous closing is Nazareth’sApanhei-te, Cavaquinho!(Gotcha, cavaquinho!); it’s as if Milhaud is triumphantly saying,Apanhei-te Brasil!And how.