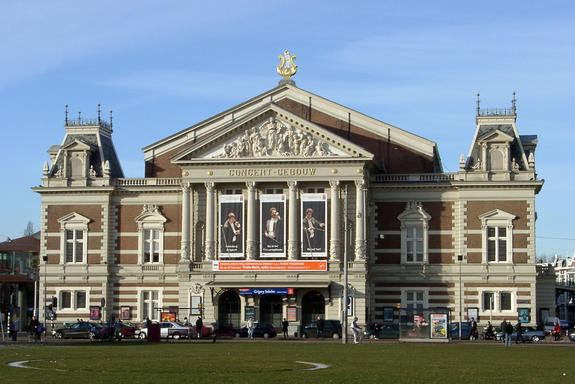 It’s Sunday afternoon in the Concertgebouw, one of Europe’s most magnificent concert halls, and members of its resident orchestra, theRoyal Concertgebouw Orchestraare milling around the artist canteen, preparing to perform a programme of Bach for a young audience. The atmosphere is relaxed, and the sounds of babbling voices and warm-up arpeggios float through the air. primephonic’s Sarah Jeffery joins five of the musicians during their pre-concert coffee, to chat about concert preparation:

How do you feel just before you perform?

I’d say focused, concentrated, and with a positive energy. Excited, but not from nerves. I don’t really get nervous. You feel that you’re going to do something, that something exciting is going to happen…

How did you feel before your very first concert with the RCO?

It was November 2000, Strauss with conductor Lorin Maazel. It was really exciting – lots of extra players, and I had my own part. Normally we play in larger settings. And of course with Maazel, a well-known conductor. Today is Bach so it’s a bit smaller, though still with four people to a part. It’s great!

How do you prepare physically before a concert?

I like to be there quite early because we have our orchestra basses that stay here. I often take mine home to practice on, but you don’t carry it around every day. The string length is different on own my bass, so if I warm up at home directly before a concert, then I’ll come here and all the notes are in different places! If I can warm up on the bass that I’ll be playing on, I’ll feel more comfortable.

In the morning I use my practice pad, a sort of drum pad with a rubber layer on top. It gives a natural bounce. The neighbours don’t hear me playing – as a timpanist, it’s important to build a good relationship with them! [laughs]. So, I start with eight strokes on the right, then eight on the left. Then after five or ten minutes you’ll move on to something stronger, some rolls for example.

Interior of the Concertgebouw, Amsterdam

Well, you have to warm up the muscles and that doesn’t happen in one minute. You have to just feel it, when they start to warm up.

What about the preparations in the week before?

The preparations in the week before are indeed different to a concert day. I’ll collect my sheet music and practice it at home, listening for the tempi and if there are any special things I have to take note of. I think I spend about 3, 4 hours on this in a normal week, next to my own practice of course – you always have to keep practicing your instrument! It depends on the pieces, of course. Bruckner, Mahler, Shostakovich will take quite some practice. The Bach suite that we will perform today is also difficult – there is some very special articulation in the right hand. It’s a smaller setting too, so you have to be perfect!

Do you have any tricks to get yourself ‘in the zone’?

Sometimes I like to simply practice listening before a concert. I’ll sit in the canteen and close my eyes and listen to the sounds around me, trying to identify them. That’s a good way to focus and relax. There are a lot of sounds going on, and if you try to identify and describe them, it’s challenging. That helps me focus and be more in the moment.

Shiny new Schnellar timpanis at the Concertgebouw, Courtesy of Adams

Dare I ask this - has anything ever gone wrong on stage?

There are always funny things. I was once on tour with the Frysk Orchestra, on the island of Terschelling. During the concert a pigeon flew into the hall, and landed next to me on my smallest timpano. Really. So I tried to play on the other timpani. The pigeon just sat there and looked at me, and after while I heard “pfffrt” – he had left me a little present… The audience thought it was hilarious. But as for something going really wrong-  no, touch wood!

Actually, yes! There was only one time that nerves got to me. I’d had a very busy day, and rushed onto the stage. I suddenly noticed two giant cameras pointed at me, and Bernard Haitink was conducting… We were playing Brahms' violin concerto, that starts really slow with two bassoons for eight beats. I started to play, and it was as if it was all happening to someone else. I thought “what is the person next to me doing!” It slowly dawned on me that I was pressing down all the wrong keys, and it made a sort of steamboat honk. Haitink was glaring at me, and afterwards everyone was asking if my bassoon was broken! Since then I try to avoid being busy on a concert day – not too much rehearsing, exercising or elaborate cooking. It’s been fine ever since. You can put this in by the way – everyone makes mistakes!

Do you have any other sage advice?

Well, I always used to put my right shoe on first, for good luck, but I don’t do that anymore. [laughs]. I’ve been playing solo timpani for 46 years, and after a while it becomes second nature. But – always take it seriously! Every concert is just as important. Your performance on stage is top class.

The “Golden Age” of Violin Playing