Gerard Schwarz at 70: An Interview

Gerard Schwarz, music director of the All-Star Orchestra and the Eastern Music Festival, and Conductor Laureate of the Seattle Symphony, enters his 70th year. Marking the occasion, an impressive 30-disc album has recently been released on Naxos Records. Primephonic caught up with him to discuss his impressive career, superb recordings and unstoppable endeavors.

The Gerard Schwarz Collection has been released to mark your 70th birthday, showcasing retrospective recordings in a 30-disc album. This year also saw your memoir published and Emmy Awards. What are your thoughts on what has been a year of exciting events?

It’s a dream come true to have all of these things come together at the same time. The memoir I wrote of course was very meaningful to me. I never was intending to write one but for a variety of reasons, there it was. It’s called Behind the Baton. It’s about performances, it’s about repertoire, it's about conducting, but it's also about living a life in music. There are many lessons to be learned as you go along and I thought for future generations I might be able to give them some hints on how I dealt with issues that came about like building a hall and building an orchestra.

And with the recordings, Naxos had approached me with this idea and I contacted Nonesuch where I had done about 21 or so LPs. Many of these were never released on CD, and many which were released on CD were out of print. I even had to transfer some LPs, which was really interesting, and once Nonesuch said yes, the process began. With the great support of Klaus Heymann, I thought “Wow, we really have something here.”

We found a version of Schubert’s Third recorded with the New York Chamber Symphony that was never edited and we had a Schubert Ninth that I really wanted to get out but the tapes had disintegrated, and then it went from there! There are some Handel Arias which I really love and I wanted Mozart to be part of it. We did the Brahms Schoenberg Piano Quartet from the Eastern Music Festival, and of course many of my old trumpet recordings. I thought it was important that I included a few CDs of American repertoire that has been so important in my life. It was a thrill. And 30 CDs is a lot of CDs!

I also recently did a program with the Juilliard Orchestra that was like a dream come true for me. Difficult music of Diamond, Druckman and Schulman. All composers associated with the school. I was just thrilled and the kids loved it. All this stuff is going on this year and it makes me extremely happy. 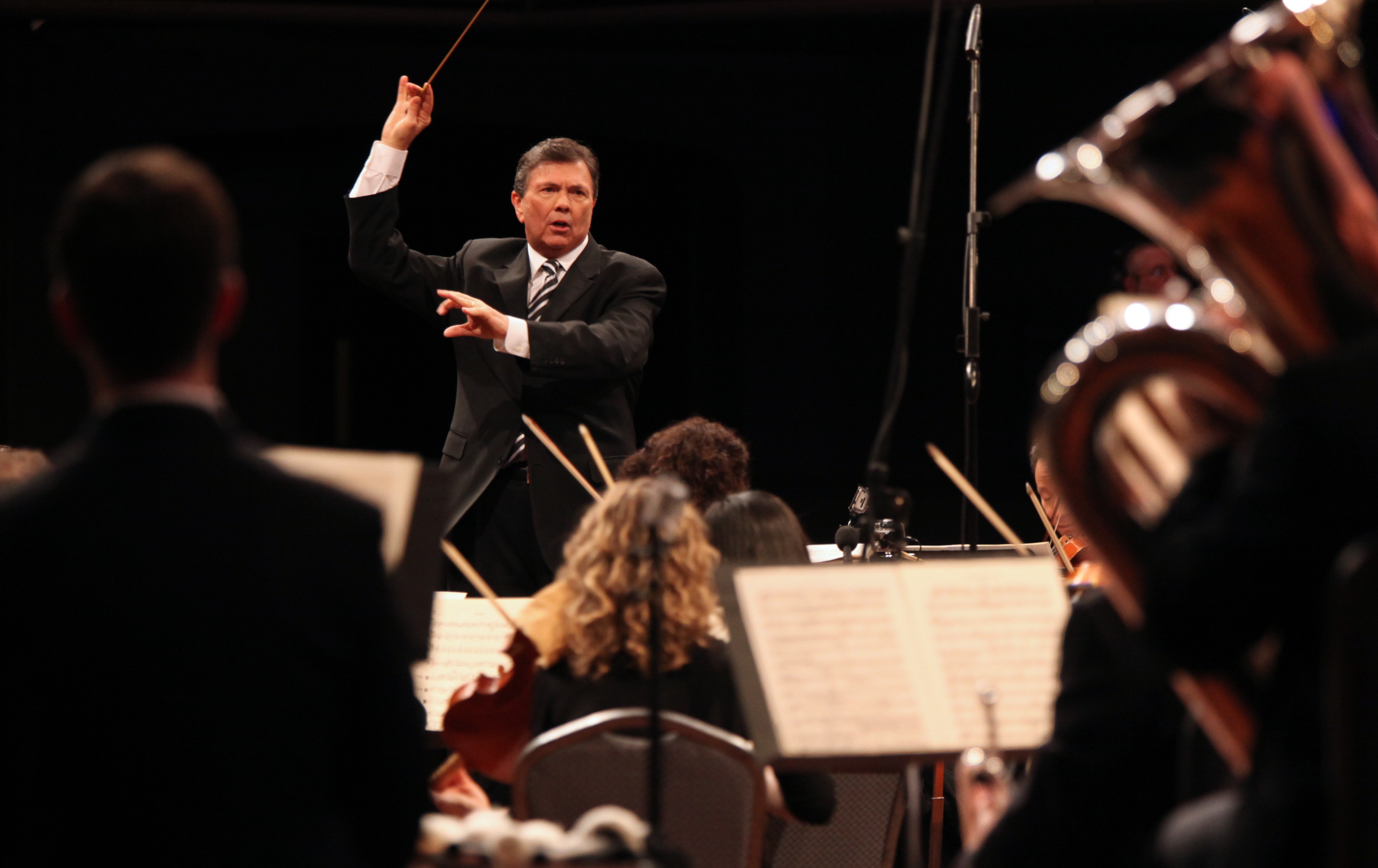 You were music director with the Seattle Symphony for 26 seasons and are now conductor laureate. It must be an honor to have led one of the world’s top orchestras. What was your biggest achievement during your time there?

Starting from where it was artistically and bringing it to a new level and broadening the repertoire was so important to me. And then, of course, helping to build Benaroya Hall. I believe there are five things you need for success. The first are talent and intelligence. The second is work ethic, you have to work very hard. Then a positive attitude, I call it a yes attitude. And there’s willingness to do anything, to go beyond the job description. I thought about that a lot, it’s not just something that I’ve come to casually and I see it all the time, in my kids and in my own family. And it’s also not just in music, it can be in any career.

You are known for championing works by American composers, such as Walter Piston, William Schuman, David Diamond and Philip Glass. What was in your opinion, the most significant performance you conducted?

What jumps out at me are a few things. Doing all the symphonies of Schuman for Naxos Records was extremely significant, it had never been done before. There’s a recording here or there of this piece or that piece, but we’ve never had them all, so that was very important. To do a live recording of the Deems Taylor opera Peter Ibbetson and get a live recording was very important as well as Howard Hanson’s Merry Mountwas also a big opera. To do David Diamond’s 10th Symphony, which I think was a significant event for me and the orchestra. It was the only symphony premiere I did of his. The others were premiered by Mitropoulos, Koussevitzky, Munch, Ormandy, Bernstein and Masur, so it was nice to be part of that group.

The Emmy-Winning All-Star Orchestra TV Series was filmed with an impressive 18 high-definition cameras and is back for a new season. The orchestra is made up of players from some of the country’s top orchestra. Did you hand-pick the players?

In my last years in Seattle we did a few television shows where the format was not live. We would record two to three performances and do some packages around them with educational talks and interviews. They were quite successful. Then we were actually allowed to record one without an audience, so we had performances on Thursday, Saturday, and Sunday, but none of Friday. I asked Andre Watts and the orchestra if they would consider doing a performance on Friday morning with nobody in the audience so we could get better camera shots. They all agreed, we did it, and it was incredible. That show won Emmy's and I thought to myself, what an interesting idea.

“Made for television” concerts really hadn’t existed in this country since the late fifties. Everything was “Live” and always two hours with intermission and filler so I thought to myself what if we went back and did an hour-long concert with a talk surrounding it. And then from all the material we have now recorded, do some really significant educational work. That’s how it came about. I went to a group of friends in Seattle and told them I had this idea. Actually Jody my wife named it, and I said I wanted it to be fundamentally American, like all-star baseball. Then I got a half dozen people together who were friends and said “Hey, why don’t we try this”. That was the genesis of the very beginning of it.

And then there’s how. Well I chose my friends, I got recommendations as necessary from them and then each section was happy. I tried to get many leaders from major orchestras. That’s how it all began.

What was your reason for starting up the All-Star Orchestra?

We produced the TV shows thus far and we have won six Emmy's, but I really wanted to get an important educational component. So the first year we did a lot of interviews with experts and players, not knowing what we were going to do with it, but I wanted to somehow make a difference educationally. I feel the two big issues are exposure and education. So the exposure part was covered, television was free and I wanted education part to be free as well. I wanted to give music teachers more tools to enhance what they were doing. With all this material, we were able to convince the Kahn Academy to do some music education, which they had not done before. We raise money for everything and it becomes available for free. So far we’ve reached 6 million students.

Do you have any advice for young budding conductors?

There’s a lot of advice and a lot of it is in my book but you have to study really hard, you have to really know music. So many kids study beat and time and that’s of minimal importance. What’s important is knowing musical ideas and making performances. Having all the qualities that I spoke about before in terms of success. To take advantage of every opportunity. If they ask, “Would you conduct the local band?” say yes. Do everything you can do and most importantly have perseverance. It rarely comes easily or quickly, you have to stick with it. I don't know any conductors that haven’t had to continue to persevere at it. Many give up but you need to have the energy to keep going.

What do you see for the future?

Conducting all over the world, which I love. My number one priority is the All-Stars and music education, helping its resurgence in the schools. I want us all to be flourishing in this world. My main focus is to think about that. I’m composing a lot. I enjoy it, which is shocking to me because I never used to.

I’ve done now three TV shows with the Marine Band in the same format as All Star Orchestra to teach about band music because music lovers at orchestra concerts don’t know what a band is or the repertoire is. And, hopefully we’ll be doing more shows with the All-Star Orchestra.

Listen to the full Gerard Schwarz Collection on Primephonic.