Composers and the Demon Drink Alcohol has long been a popular and socially acceptable drug thanks to its ability to loosen inhibitions and, as Oscar Wilde astutely pointed out, “[when] taken in sufficient quantities, may produce all the effects of drunkenness”. But this indulgence comes at a price.

Theirs was not an auspicious first meeting. The youngJohannes Brahmswas on a walking holiday en route to visitingRobertandClara Schumann, when he stopped at  Weimar in June 1853 to hearFranz Lisztgive a private performance of his magisterialPiano Sonata in B minor, a work now regarded as one of the finest in the piano literature. Brahms dozed off during the recital. Perhaps he was worn out by all the physical exertion and fresh air; some have suggested that he may have suffered from sleep apnea which is characterised by short attention spans and loud snoring. Or maybe it was the result of a heavy lunch. Whatever the case, their names have since been linked in the popular imagination: Brahms, the arch conservative who admired Liszt’s pianism but not his music; Liszt, the progressive radical who found Brahms’s music “hygienic, but not exciting”.

Johannes Brahms in the circle of the friendly family Fellinger, 1896, courtesy of UNESCO

For Anglophone audiences their names are also synonymous with inebriation, not that either were noted booze hounds. Liszt had a rosy-glowed middle age, that period in life where many substitute the restorative properties of tea with the gentle befuddlement of wine. His other tipple was cognac but he was not known to mask the smell on his breath with mints for he smoked foul-smelling cigars (his partner, the Princess Carolyne von Sayn-Wittgenstein preferred her cigars to be dipped in iron filings for the stronger flavour produced).

Alcohol has long been a popular and socially acceptable drug thanks to its ability to loosen inhibitions and articles of clothing, and, as Oscar Wilde astutely pointed out, “[when] taken in sufficient quantities, may produce all the effects of drunkenness”. But this indulgence comes at a price. Anyone who has tried to sing karaoke or play aBachfugue while sozzled will no doubt agree with Shakespeare when he observed that drinking “provokes the desire, but it takes away the performance”. And as for alcohol’s magical ability to summon the Muses to give voice to one’s innermost thoughts (in vino veritas), this is surely overrated: most composers produced their masterpieces in spite of their drink habit, not because of it.

Years afterFranz Schubert’s untimely death, his old friend Joseph Kenner wrote disapprovingly in 1858 that Schubert’s “craving for pleasure dragged his soul down to the slough of moral degradation”. A socially awkward and sensitive person, Schubert nevertheless armoured himself with Dutch courage and liked to carouse until the small hours after his musical soirées. He habitually rose early and unless he was called to the great white telephone after the previous night’s excesses, he would work industriously throughout the day.  LikeBeethoven, he could sometimes be found composing in taverns, finding the change in atmosphere conducive to working as well as the delicious local brew. His friend, the libertine poet Franz von Schober, was an undoubtedly bad influence. Their visits to brothels during the evening’s revelries were most likely responsible for giving Schubert something more lasting than a headache, or as Schober delicately put it when writing of Schubert’s later hospitalisation that it was “… the result of excessively sensual living and its consequences”. When he died, Schubert left behind many unfinished compositions although the suggestion that work on hisSymphony No 8 in B minor (“Unfinished”)was interrupted by a trip to the local tavern is a tall story from a celebratedBrasseries Kronenbourgtelevision commercial.

Unwinding at the Petroleum Club in Houston, Texas,Igor Stravinskyexclaimed “My God, so much I like to drink Scotch that sometimes I think my name is Igor Stra-whisky”. It’s the sort of observation one makes as the liquor hits the spot (my own is that for want of the letter “D”, an anagram of my name is “pink gin deviant”). In later life, Stravinsky would invariably carry around a flask of his favourite 30-year old Ballantine’s whisky from which he would take regular swigs. A doctor in Los Angeles once advised him “Drink plenty Scotch, it’s the best thing”, a recommendation which he gladly followed. He used it as a palliative for bad reviews and even for washing down his medication. Constant lubrication did not however assist his creative inspiration; he once admitted “I got dronk … I slept one hour. . . . I have had supper, and then I have composed two bars!” 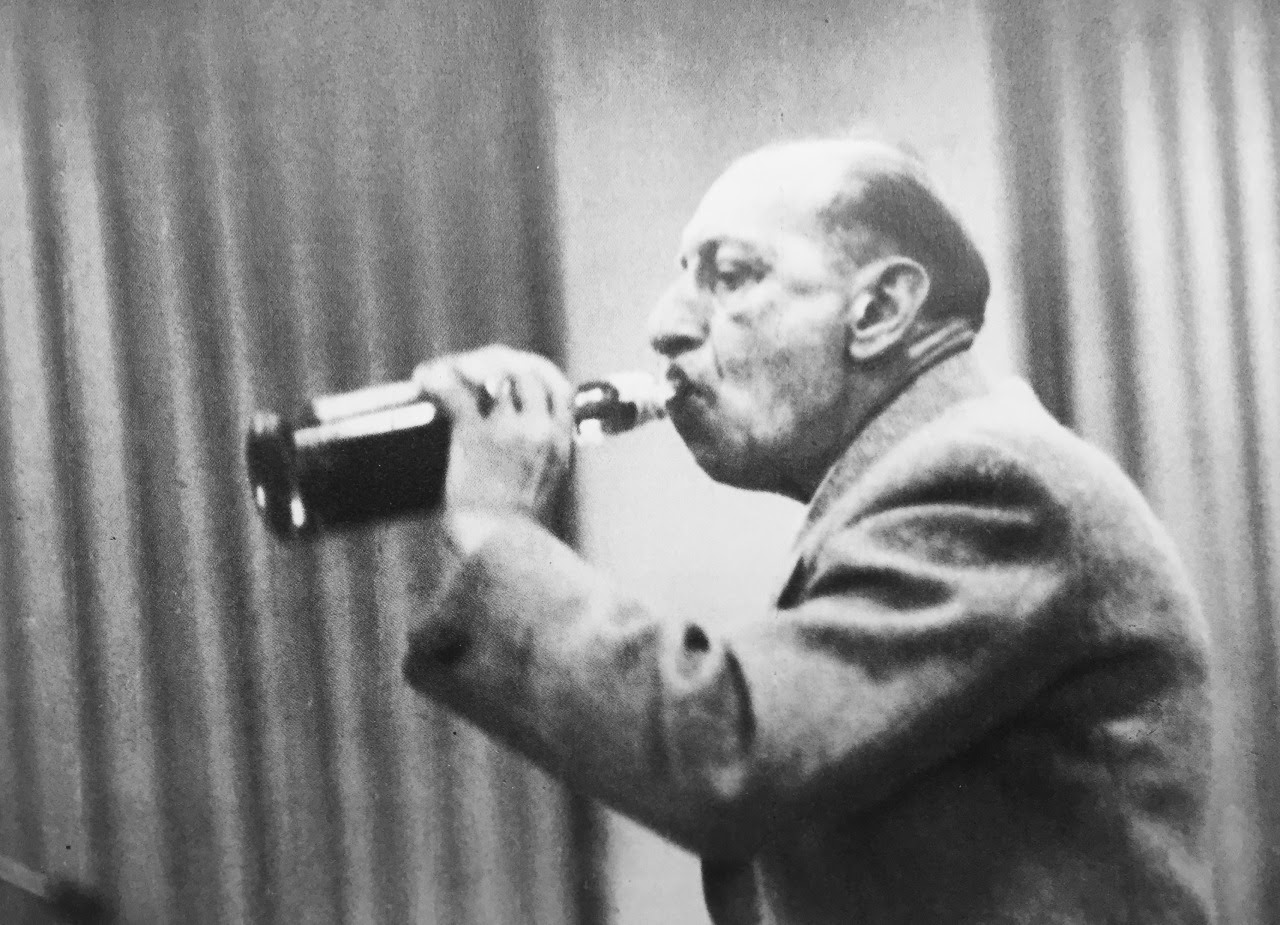 In the famous portrait ofModest Mussorgskyby Ilya Repin, painted a few days before the composer’s death, he looks careworn and dishevelled; the very picture of an irredeemable sot. For while music was Modest Mussorgsky’s consuming passion, he himself was consumed by the demon drink. His happiness did not consist in “the frequent repetition of pleasure” if indeed alcohol ever gave him much pleasure, instead it thwarted his creativity, hastening his decline and eventual death.Tchaikovskyfared marginally better; although not a Premier League tippler, he ill-advisedly drank to soothe his anxiety, never a recipe for success for it instead fuelled his depressive moods during which he composed some of his most haunting music, notably hisSymphony No. 6 “Pathetique”. 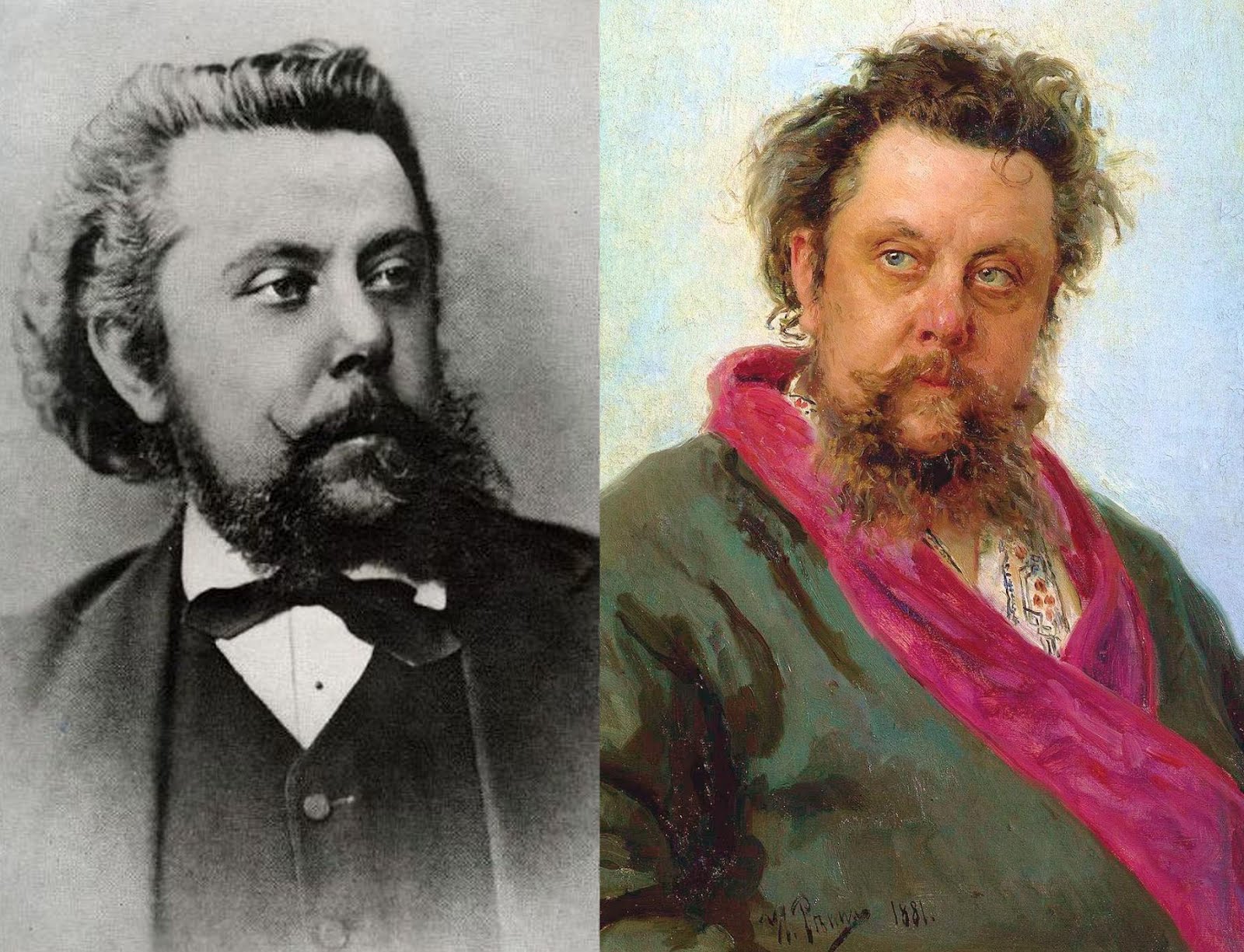 The genial and mild-manneredAntonín Dvořákhad no such problems. “I made a mistake in believing that American strong waters would upset his Czech nerves” recalled the influential critic James Huneker who accompanied him for a day out in Manhattan shortly after Dvořák’s arrival in the country. “Rather too jauntily I invited him to taste the American drink called a whisky cocktail ...”

His patron Jeanette Thurber, the wealthy President of the National Conservatory of Music, had facilitated their meeting as she knew both their reputations as drinkers. But in Dvořák, Huneker had met his match. They started in Gorewitz’s bar across from the Conservatory and then proceeded to the fashionable Gus Lüchow’s on 14th Street and from there on it degenerated into a rat-legged tour of the “thirst belt” on 3rd Avenue.

“At each stopping-place … [Dvořák] absorbed a cocktail or two… I left him swallowing his nineteenth cocktail. ‘Master,’ I said, rather thickly, ‘don't you think it’s time we ate something?’ He gazed at me through those awful whiskers which met his tumbled hair half-way: ‘Eat. No. I no eat. We go to a Houston Street restaurant. You go, hein? We drink the Slivovitz. It warms you after so much beer.’”

In Dvořák’s music there is no hint of any alcohol-fuelled rages or despair, quite the contrary. In his lyricalString Quartet in F, “American”, one senses his contentment at being among Czech émigrés in the small town of Spillsville, Iowa. It’s easy to imagine him relaxing in the sun by the Turkey River, notebook in one hand, beer glass in the other, his head brimming with melodies.